Welcome to ReCreate Ministry.  Our mission is making broken things new in Christ.  They say that a man’s most expensive hobby starts at $.97.  As a guy who grew up loving cars and drag racing, I know that this is true, because I have a lot of friends in the racing business, as well as a dad who is obsessed with everything cars.  When you work on cars, whether professionally or for fun, you are quickly made aware of how expensive it can get.  My favorite car growing up was the

Ferrari F40, which was one of the most expensive production cars on the market when it was released in the early 90’s, but today, they’re worth even more.

“As they were walking along the road, a man said to him,  ‘I will follow you wherever you go.’  Jesus replied, ‘Foxes have dens and birds have nests, but the Son of Man has no place to lay his head.’”  My first point is this:

This is the first of several episodes which directly teach the difficulty of discipleship.  Here, Jesus makes the demand that He come before home and family.  Following Jesus could cost you everything, because redemption cost Jesus His very life.  Has there ever been a time in your life where following Christ cost you something?  Were you ever disowned or looked down on by family because of your faith?  Listen to the story of a girl in Saudi Arabia who was not only disowned, but beaten, tortured, and killed for her faith.

The first man expresses his interest in and readiness to follow Christ.  He tells Jesus he is ready to go anywhere Jesus would lead, but Jesus’ response is not likely what the man had expected.  Jesus knows that the man has not counted the cost of following Him when He tells him that the Son of Man has no place to lay His head.  Animals and birds have their places of habitation, but following Jesus meant that he would be camping out under the stars most of the time (some of us are thinking this sounds like a pretty good idea, right?).  Jesus is teaching His disciples that they must surrender their comforts to follow Him, including the knowledge that they will have a place to sleep every night.

Jesus knew the cost.  He had nowhere to lay His head.  He was essentially homeless.  He owned nothing.  If that was what it would cost you to follow Christ, would He still be enough?  Are you willing to give everything over to the mission of the Kingdom?  Following Jesus costs everything, just as our redemption cost Jesus everything on the cross. 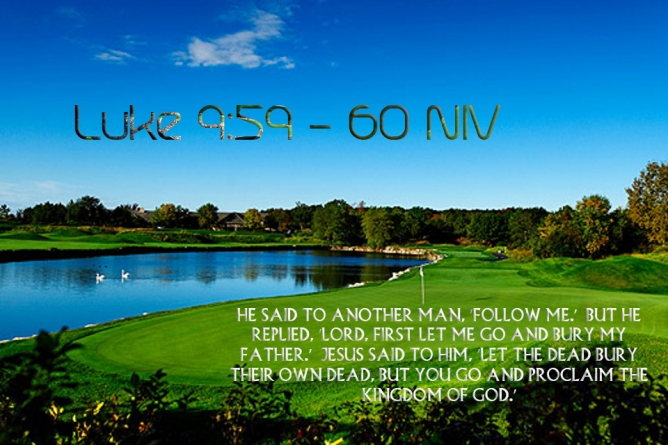 “He said to another man, ‘Follow me.’  But he replied, ‘Lord, first let me go and bury my father.’  Jesus said to him, ‘Let the dead bury their own dead, but you go and proclaim the kingdom of God.’”  My second point is this:

The second man was called by Jesus.  What an honor!!!!!  Instead of jumping at the chance, he asked to first be allowed to go and bury his father.  Some commentaries take the man’s response to mean that his parents were actually still alive, and that he would come and follow Jesus after they had passed.  John Piper said, 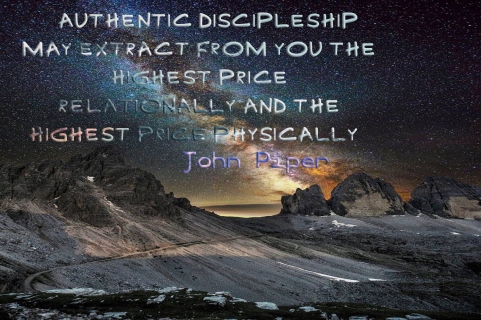 “Authentic discipleship may extract from you the highest price relationally and the highest price physically.”  How often do we say this exact same thing to Jesus?  He’s calling every one of us, yet we tell him over and over again that we have other things we have to do first.  We tell Jesus we have to break our addictions or bad habits.  We tell Him that we have to get a new or better job, get out of a bad relationship (or into a good one), get a new house or car, or any number of other things.  Jesus tells us to come just as we are, leaving everything else aside.  Kingdom affairs are more important than worldly affairs.

For the Jewish people, burial is a very important thing.  To leave someone unburied would have been a very scandalous thing.  Still, Jesus tells the man to let the spiritually dead bury the dead.  He is not saying to leave the parents unburied, but to let those who are dead spiritually take care of those who are dead physically.  Those who are followers of Christ have a higher calling on their lives, and should therefore have higher priorities.  We should not deny or delay our heavenly calling.  Jesus wants to be our top priority.  Is that where He fits in your life?

“Still another said, ‘I will follow you, Lord; but first let me go back and say goodbye to my family.’  Jesus replied, ‘No one who puts a hand to the plow and looks back is fit for service in the kingdom of God.’”  My last point is this:

The third man, just like the first, offered his services, but with some conditions.  He first wanted to be allowed to go and say goodbye to those at home before coming and following Jesus.  Again, this is something we often do.  We tell Jesus yes, but we try to clean ourselves up first, or we try to advance our place in life.  Jesus senses the same reluctance in us that He sensed in this man, which is the desire to put something else ahead of following Him.  John MacArthur said,

“The Christian life is not adding Jesus to one’s own way of life, but renouncing that personal way of life for His and being willing to pay whatever cost that may require.”

The illustration Jesus uses here of a person putting a hand to the plow refers back to the prophet Elisha responding to the call of Elijah to come and follow him, which is found in 1 Kings 19:19 – 21.  Elijah tells Elisha to go back and say goodbye to his family, but to remember what has been done to him.  This might have been a rebuke at any delay in following.  Elisha responded differently than the man Jesus speaks with, though.  He goes home, slaughters his oxen, and burns the wooden yokes, signaling a complete break from his past life.  This is what Jesus requires of us.  We are to put aside the things of our past, and forsake everything to follow Jesus.  Elisha’s farewell feast celebrated his new role in becoming the aide to Elijah, just as our turning away from our old life to follow Jesus is to be celebrated.  Jesus wants total dedication, not half-hearted commitment.  His followers must accept the cross along with the crown, and judgement as well as mercy.

We thank You for sending Jesus to set the example of what it means to be completely committed to You.  I pray that, if anyone reading this has not made that commitment, that they would make the decision to put aside their own desires and follow You.  It’s in Jesus’ Name we pray.