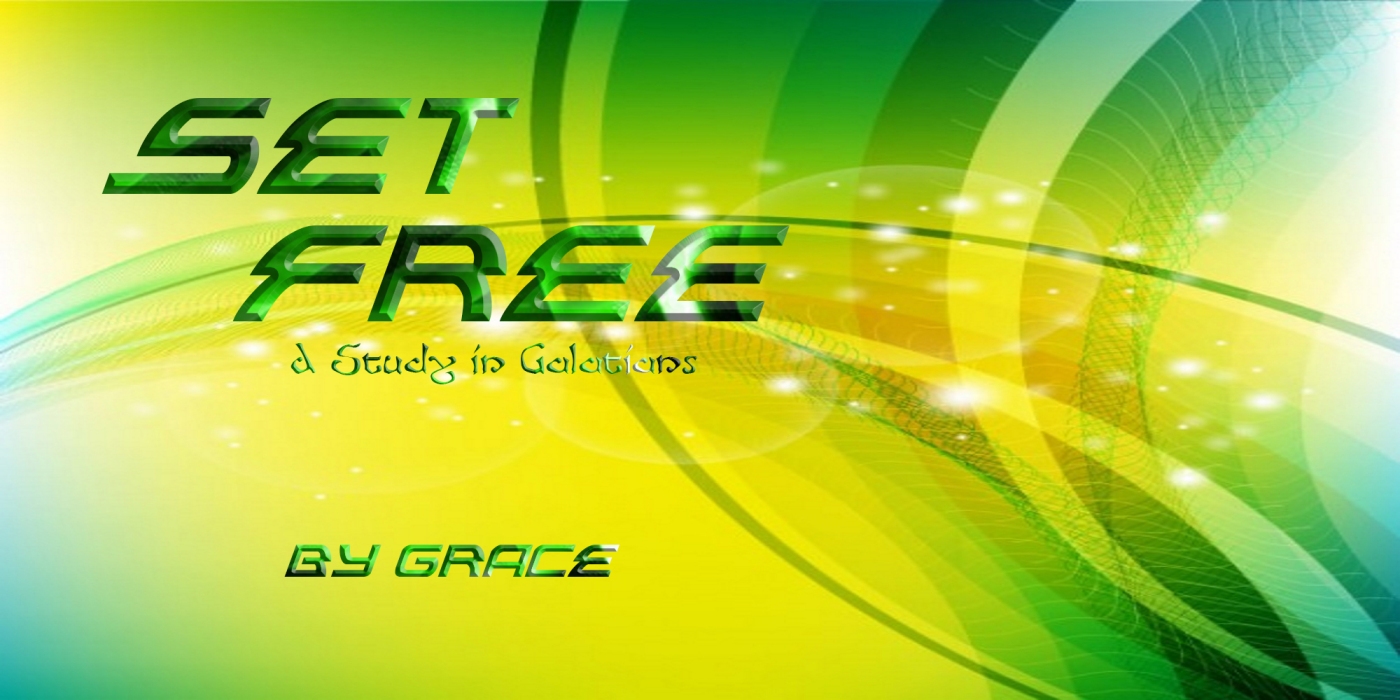 Welcome to ReCreate Ministry. Our mission is making and growing authentic followers of Christ. In the fall of 1983, a coup occurred on the West

Caribbean island of Grenada, led by Cuban-backed communists who overthrew the government and installed a totalitarian dictatorship. The people lost their freedom. Over 100 dissenters, including 50 children, were marched into the fort of the capital city of St. George and completely disappeared. A local pastor relayed the terror of living through the oppression. He believed that the children were killed and dumped at sea. President Ronald Reagan took notice, and deployed a military rescue team to Granada. Within a day, the island was free again. The people of Granada learned that liberty is most precious when it is suddenly taken away.

This week, we are continuing our series called Set Free. Last week, we looked at Paul’s missionary journey to the region of Galatia, and the beginnings of the church there. I wanted to look at that so that we would have some context for the remainder of this series. This week, we are going to be talking about the fact that we are set free by grace. 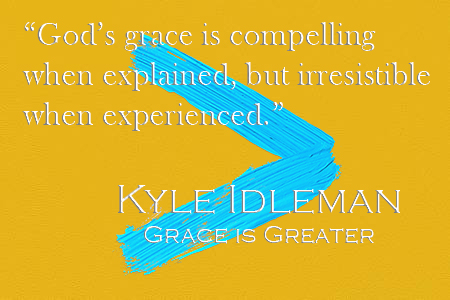 Kyle Idleman, pastor at Southeast Christian Church, says “God’s grace is compelling when explained but irresistible when experienced.” Paul mentions the word grace over 100 times in the New Testament. He was absolutely obsessed with it, and for good reason. Paul was someone we would think of today as the kind of person who least deserved grace, but he experienced it in a big way, and went on to talk about it quite a bit. 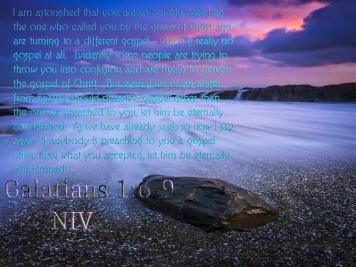 “I am astonished that you are so quickly deserting the one who called you by the grace of Christ and are turning to a different gospel – which is really no gospel at all. Evidently some people are trying to pervert the gospel of Christ. But even if we or an angel from heaven should preach a gospel other than the one we preached to you, let him be eternally condemned! As we have already said, so now I say again: If anybody is preaching to you a gospel other than what you accepted, let him be eternally condemned!” My first point is this:

After his introduction, Paul starts off his letter shocked that the Galatians were turning away from grace and turning back to trying to earn their salvation. He was shocked that the people were trying to pay for a priceless gift. Have you ever done that? Several years ago, I went to a garage sale with a friend of mine. He was going to pick up a couch that he was buying from the lady doing the sale, and the only reason I went was because he needed my truck.

We got there late in the afternoon, and almost everything she was selling was already gone. She and a friend of hers were even boxing up things that hadn’t sold to put away, or to get rid of. One of the things that she was trying to sell was a fairly new golf bag. As I was looking at it, I noticed that it didn’t have a price tag. I was shocked when I asked the lady how much she wanted for the bag, and she told me just to take it (it was a fairly nice bag, at the time). I was willing to pay for it, but she wanted it to be a gift.

The people of Galatia were doing the same thing. They were trying to pay for a free gift, and the religious leaders were trying to convince them that they had to. Paul confronted this way of thinking when he said “Evidently some people are throwing you into confusion and are trying to pervert the gospel of Christ.” He cursed all those who were teaching this “works-based” gospel, twice, and tells them that this gospel is actually no gospel at all. I’m sure there are some of you who grew up with parents who treated you this way. You had to earn their love, and no matter what you did, it wasn’t enough.

I know I talk a lot about Tolkien in my messages, but it’s because his stories have had a big impact on my life. In the Lord of the Rings series, we meet two brothers, Boromir and Faramir. They are the sons of Denethor, the captain of

Gondor. Boromir is the older brother, and it is very obvious throughout the books that he is the father’s favorite. Even after his death, Faramir is treated as unequal to his brother, and it is very clear that he will never measure up to the legacy of his older brother in his father’s eyes. In the movie Return of the King, there is a scene where Faramir confronts his father on this.

He says to him, “You wish now that our places had been reversed. That Boromir had lived, and that I had died.” His father replies and confirms that this is true. It is, in my opinion, one of the most personal moments in the entire trilogy, because it is a moment that so many people can relate to. Faramir then has to go and prove his worth to his father, and is almost killed in the process. Now, most of us will never have to die to earn our parent’s love, but far too many people understand the concept of having to achieve some sort of status or success for their parents to be proud of them. 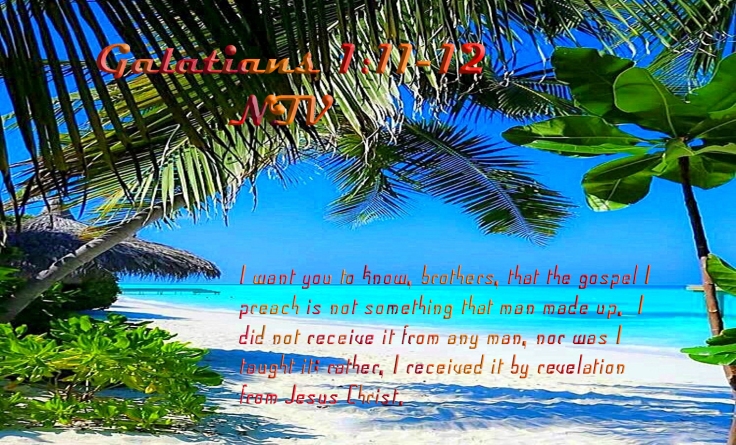 Galatians 1:11 – 12 (NIV) says “I want you to know, brothers, that the gospel I preached is not something that man made up. I did not receive it from any man, nor was I taught it; rather, I received it by revelation from Jesus Christ.” My second point is this:

The Judaizers knew that if they could undermine Paul’s apostolic authority that the message of liberty would lose it’s power, so Paul tells the churches in Galatia that the message he preached to them did not come from man, but from Jesus. The Judaizers claimed that the gospel of grace was false because it omitted the Law of Moses, but the reality was that Judaizers were the ones perverting the gospel by adding legalism to it. Paul tells the Galatians that the reason they should listen to him instead of the false teachers is that the gospel is not man-made, but it is made by God. Since the message of grace comes directly from Christ, it has the utmost authority over any other message. 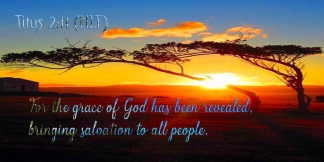 “For the grace of God has been revealed, bringing salvation to all people.” Salvation was offered to all, and as Paul told the churches in Galatia in v. 6, the people were called by the grace of Christ. It was a free gift. The message that the false teachers preached was that the people had to earn their salvation, but Paul gave them the good news that grace had a name, and that that name is Jesus. Because of His death on the cross, the grace of God was revealed in Christ, and salvation is now available to all people. This actually brings me to my last point.

Galatians 1:13 – 17 (NIV) says “For you have heard of my previous way of life in Judaism, how intensely I persecuted the church of God and tried to destroy it. I was advancing in Judaism beyond many Jews of my own age and was extremely zealous for the traditions of my fathers. But when God, who set me

apart from birth and called me by his grace, was pleased to reveal his Son in me so that I might preach him among the Gentiles, I did not consult any man, nor did I go up to Jerusalem to see those who were apostles before I was, but I went immediately into Arabia and later returned to Damascus.” Paul is telling the Galatians here just how radical his transformation was. Paul had been a persecutor of the church, and after meeting Jesus, was changed into an apostle of the church. He went from being one of most zealous religious men of his time to being completely sold out for Christ, and he wanted the Galatians to experience the same life-changing power of grace that he had experienced. At the beginning of this message, I mentioned that Kyle Idleman said “Grace is compelling when explained but irresistible when experienced.” That’s exactly what Paul is telling not only the churches in Galatia, but also each one of us today. I like the way The Message paraphrases Romans 8:1. It says “With the arrival of Jesus, the Messiah, that fateful dilemma is resolved. Those who enter into Christ’s being-here-for-us no longer have to live under a continuous, low-lying black cloud. A new power is operation.” That new power is called grace, and it’s available to everyone who asks for it. To me, grace is not only something that we accept, though. Grace is so powerful that it is worth surrendering to, because when you surrender your life to the grace of Jesus, that’s when you are truly free. Let’s thank Him for that.

Father
We are so thankful for Your grace. We are thankful that You offer us the free gift of salvation, and that it’s not something we have to earn, because none of us ever could. Lord, I pray that, if there are any reading this who have never understand or experienced grace, Father, help them to surrender completely to You so that they may experience Your grace. Most of all, we thank You for Jesus, and it’s in His Name we pray.
Amen

If you have never experienced grace, we would love to talk to you about what that means. There is no greater decision you could ever make. Please reach out to us, if that’s the case. Next week, we will be looking at how we are set free by faith. I hope you’ll join us as we continue this series through Galatians. Have a blessed week!!!!!