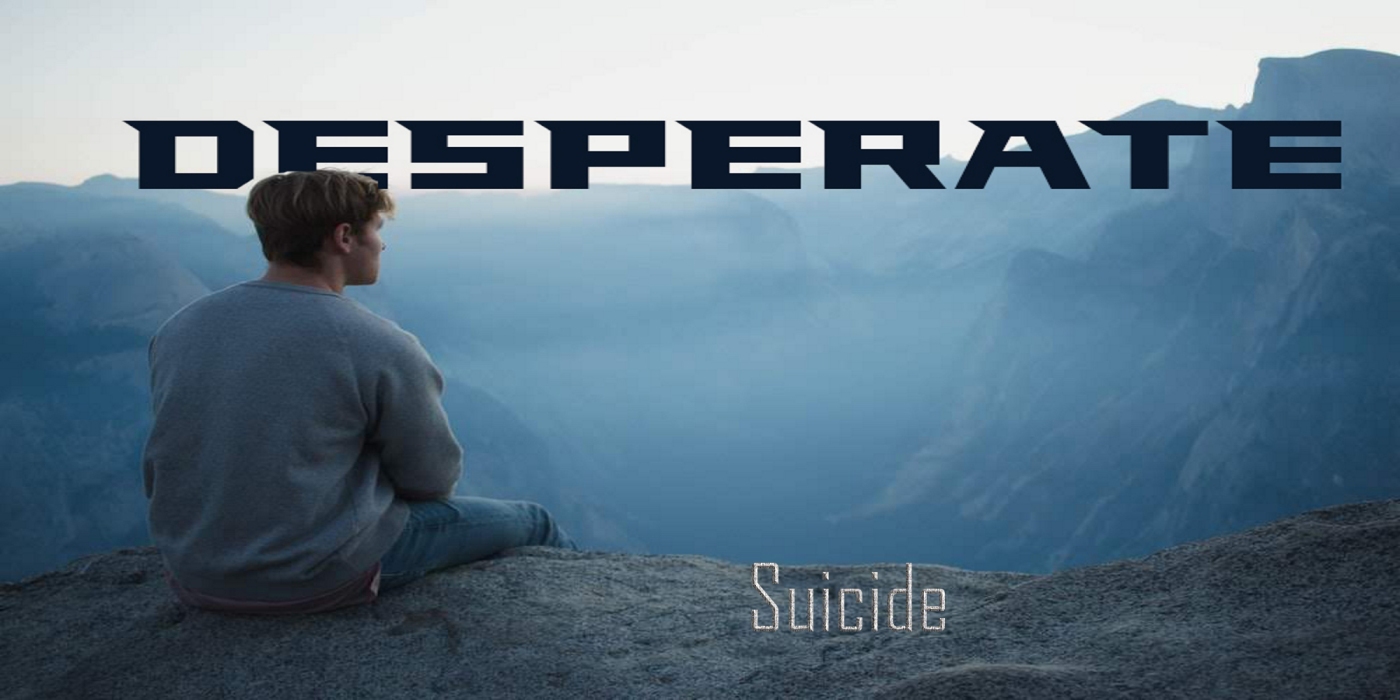 Welcome to ReCreate Ministry. Our mission is making and growing authentic followers of Christ. The last two weeks, we’ve been in a series called Desperate, and we’ve been looking at some very heavy topics. This week, we are closing out our series with what is probably the heaviest one, suicide. This is a topic that I know is difficult to talk about, but it’s also one that I think is very important for us to discuss. In 2017, 47,173 people in America took their own lives. Suicide attempts from that year are estimated over 1.3 million, and suicide is the 8th leading cause of death in the U.S. Believe it or not, the highest rate of suicides by age group takes place among middle aged males. Suicide is also the number one cause of death among college students. The sad thing is, those numbers are continuing to climb.

A little more than 4 years ago, a friend of mine were at the drag races when we both started getting messages that one of our high school classmates had taken his life. Since then, I’ve had 3 more rounds of the same messages, all letting me know that a friend had taken his or her life. There are way too many reasons to name for why someone would take their own life, but the main reason is depression. Symptoms of depression account for 95% of suicides in the world. As someone who struggles with depression, there are times that I have felt hopeless. You lose hope that you will ever come out of your depression, or you lose hope that anyone will want to be with you, or that you will ever have friends that love you. Proverbs 13:12a (NLT) says 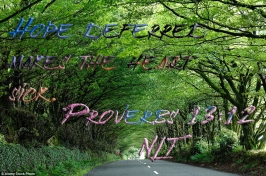 “Hope deferred makes the heart sick.” That sickness can take over a person, and make them believe any lie the enemy tells them. Chances are, you’ve either lost someone to suicide, or you know someone who has. Several years ago, I got a late night phone call from a friend of mine. She was crying, and told me that her husband had taken his life. He had served in the military, and suffered from PTSD. Sadly, this is true for many of the men and women who serve in our military. 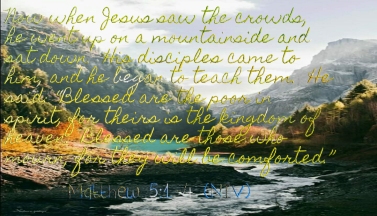 “Now when Jesus saw the crowds, he went up on a mountainside and sat down. His disciples came to him, and he began to teach them. He said: ‘Blessed are the poor in spirit, for theirs is the kingdom of heaven. Blessed are those who mourn, for they will be comforted.’” Many of those who feel like suicide is their only option fit into one of these two categories. They are either poor in spirit, or they are mourning something or someone. As we look into this topic, I wanted to talk about a few things that are important for us to think about when it comes to suicide, as well as to those who feel like this may be their only option. The first thing is this:

Many of those who are considering suicide feel like their life isn’t that important, or that their death wouldn’t matter to anyone. Look at what the apostle Paul says in 1 Corinthians 6:19 – 20 (NLT). 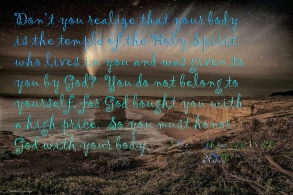 “Don’t you realize that your body is the temple of the Holy Spirit, who lives in you and was given to you by God? You do not belong to yourself, for God bought you with a high price. So you must honor God with your body.” Now, I realize that Paul is talking about sexual sin here, but the point translates equally well to anything we do with our bodies, including suicide. You were bought with a high price. Jesus gave His life so that you could have life, and it matters to Him what you do with that life. You saw above the first part of Proverbs 13:12 (NLT)

, but the second half of the verse says “But a dream fulfilled is a tree of life.” If you cut your life short, how can you ever fulfill the plans that God has for you.

Another thing I want to say is that our enemy is very real, and he loves to feed the lie that your life doesn’t matter. For years, I struggled with this thought myself. I felt like nothing I ever did was good enough, and that I really wasn’t all that important. 1 Peter 5:8 – 9 (NIV) says 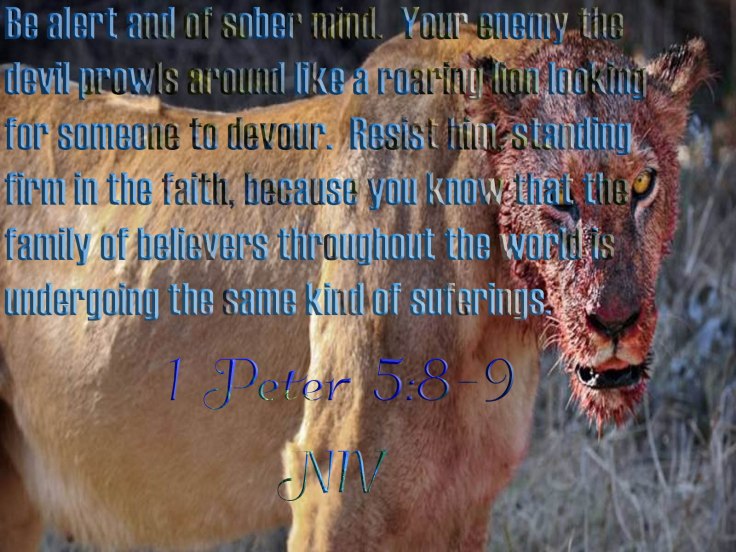 “Be alert and of sober mind. Your enemy the devil prowls around like a roaring lion looking for someone to devour. Resist him, standing firm in the faith, because you know that the family of believers throughout the world is undergoing the same kind of sufferings.” Satan will try everything he can to convince you that you don’t matter, or that no one cares. He loves it when we feel hopeless, and he even loves it when people take their lives, because it means that they are not fulfilling the purpose that God has for your life. The second thing I want to say is this:

This is another lie that Satan likes to tell, and that he loves for us to believe. When we feel like we are all alone, we have no support, and we are more vulnerable to believe more of his lies. Look at 1 Peter 5:9 (NIV) again. It says 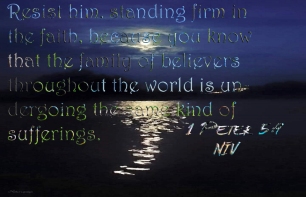 “Resist him, standing firm in the faith, because you know that the family of believers throughout the world is undergoing the same kind of sufferings.” Believe it or not, there ARE people out there who are going through the same things you are going through, and there are even more who have already been through that tunnel, and have come out the other side. Resist the lies of the enemy. Reach out to someone, even a total stranger. If you’re feeling like you’re alone, and your life doesn’t matter, get plugged in to your local church, and find community there.

As I said earlier, I have dealt with this often in my life. I have struggled with depression for many years, and still do at times. I don’t use this translation often, but I love the way 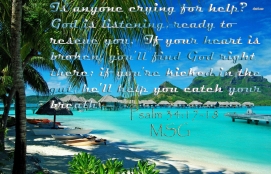 The Message paraphrases Psalm 34:17 – 18. It says “Is anyone crying for help? God is listening, ready to rescue you. If your heart is broken, you’ll find God right there; if you’re kicked in the gut, he’ll help you catch your breath.” Our enemy loves for us to believe that we are all alone, and that no one will listen to our cries, but God is always there,

(NLT) says “Give all your worries and cares to God, for he cares about you.” If, by chance, you are reading this, and you don’t know the God who cares for you, reach out to us. Anyone involved in this ministry would love to share what it means to be a Christ follower, and the freedom that comes from being His.

I want to shift gears a little bit, and talk to those who may know someone that is considering suicide, or has shown signs of it in the past. For many people who suffer from depression, or are considering taking their lives for other reasons, you may be the only Jesus they have access to. 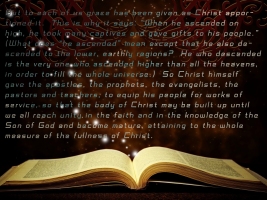 Ephesians 4:7 – 13 (NIV) says “But to each one of us grace has been given as Christ apportioned it. This is why it says: ‘ When he ascended on high, he took many captives and gave gifts to his people.’ (What does ‘he ascended’ mean except that he is also descended to the lower, earthly regions? He who descended is the very one who ascended higher than all the heavens, in order to fill the whole universe.) So Christ himself gave the apostles, the prophets, the evangelists, the pastors and teachers, to equip his people for works of service, so that the body of Christ may be built up until we all reach unity in the faith and in the knowledge of the Son of God and become mature, attaining to the whole measure of the fullness of Christ.” If you know someone who struggles with thoughts of suicide, who feels alone, or someone who has lost their hope, remember that we are called to be disciples to all nations. My prayer for you is that you would have the discernment and the strength to be a light to those who are in dark places. For many people who struggle with this, you may be the only Jesus they ever see.

There’s one more thing I want to say, and it’s not really a point so much as it is a truth that we need to realize. For most of my life, I thought that everyone who committed suicide went straight to hell. If you look at 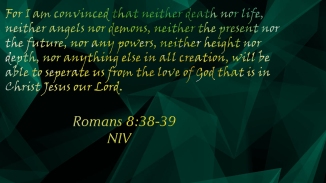 Romans 8:38 – 39 (NIV), it says “For I am convinced that neither death nor life, neither angels nor demons, neither the present nor the future, nor any powers, neither height nor depth, nor anything else in all creation, will be able to separate us from the love of God that is in Christ our Lord.” Paul is telling us that there is nothing we do in this life can separate those who are saved from the grace of God. Not everyone who commits suicide will be in heaven, but those who are saved will be. Suicide is a sin, but it is not unforgivable, and it is not our place to judge those who have taken their lives. We may not ever understand what they were going through that caused them to make that decision. That is why sharing the good news of grace with anyone and everyone we meet is so important. Let’s thank God for that grace.

Next week, we will be starting a new series called Set Free

, where we will be going through and studying the book of Galatians. If you are feeling like you’re alone in this world, or you’ve lost hope, please reach out to us. You are NOT alone. Anyone here would be happy to talk with you. If you want to know what it’s like to be a follower of Christ, and to NEVER have to feel alone again, let one of us know. Have a blessed week everyone!!!!!